KATEMCY ROCKS is operated by the Kruse family and Shain Chapman.  Katemcy (pronounced “Ka-TIM- see”) Rocks is named after a rock formation that was allegedly part of the camping grounds of Comanche Chief Ketemoczy (Katemcy) who was one of the chiefs that signed the Meusebach- Comanche Treaty, allowing German settlers in the area. It is one of the few treaties with the  Native Americans that was never broken. While our location has changed from that original rock formation, our name remains the same.

We offer over 800 acres of granite rock providing an off road experience like no other in the state. Called the "Moab of Texas," KATEMCY ROCKS presents diverse terrain for all levels of four wheelers, from stock vehicles to extreme rock crawlers. There are multiple trails with numerous obstacles from easy to extreme. Some of our most popular trails listed here.

KATEMCY ROCKS is ONLY OPEN to wheeling on the dates listed on the schedule/calendar on here or our Facebook Page. This is private property and a working ranch. We have had recent issues with people entering the property when it is CLOSED to the public. Do not enter the property when we are closed or you may be prosecuted for criminal trespass by the landowners. If you would like to coordinate either an open event (open to all wheelers) or closed event (only your group on the ranch), please contact us for arrangements and fees. Open events require a list of at least 30 vehicles to wheel for two days. Standard weekend prices are listed here.

Notice:
You must read the Rules & Regulations and comply with the minimum
Vehicle Requirements before you arrive at Katemcy Rocks

Rock Crawling near me 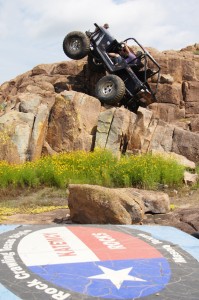